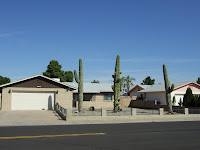 Pretty as they are, those "trees" don't provide much shade when July temperatures reach 120+ !
We returned this week from a six-day visit with Big Bubba in Mesa, Arizona. Look at the photo above... temperatures were in the mid-80's. The sky looked almost exactly like that the entire week we were there... cobalt blue with nary a cloud in the sky. It's easy to see why retirees flock to Phoenix for the Winter months! It is NOT a complete paradise though...
In addition to the above mentioned "oven" temperatures during Summer, there is this: 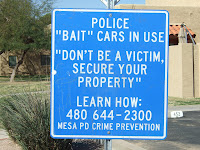 That sign was less than 500 feet from the home with the Saguaro cacti in the front yard. 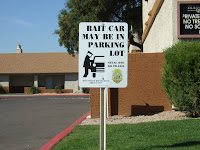 This one was at the entrance to Big Bubba's apartment complex. While we were there a report was published showing Phoenix is now the number two city in the world for kidnapping/ransom situations. To be fair, the report indicated much of this crime is committed by/against illegal Mexican immigrants, but it was sobering to think Phoenix now rivals Mexico City for that kind of crime.
At no point did we feel threatened during our visit. We took long walks in the neighborhood at night, and while we did keep our "head on a swivel", we never felt cause for concern. Maybe we were just being naive to the dangers around us?

Big Bubba's lease runs out the end of May, and he has made the decision to move. The above signs are one indication helping to make his decision... his neighborhood is "changing". The fact that his air conditioner cannot cool his apartment below 90 degrees F. during the hot months is another. Moving across town is almost as difficult and expensive as moving across country, so he has decided to move closer to where his work, reporting on Science Fiction TV and Movies, is being produced... Vancouver, B.C.. He's considering a move to Bellingham, Washington, about a 45 minute drive from Vancouver. It rains about 330 days per year there, and the year-round high temperatures are about 80 degrees. It will be a dramatic change from his surroundings the last two years...
Except in one area:
Last night I watched a report about our I.C.E. officers raiding a factory in Bellingham. They arrested 85 illegal immigrants in that raid! The next week 2800 people applied for those jobs. (I thought Americans wouldn't do the jobs illegal immigrants are doing?)

More horse manure. We're bein' fed a lot of it these days.
Posted by Greybeard at 00:38

Vancouver's a great place to live, but the weather is about as different from Phoenix as it's possible to get. Lots of rain, lots of grey overcast days. I wouldn't live anywhere else, but it'd be a big change coming from somewhere so consistently hot and sunny.

Bellingham's nice, but unless you're driving to somewhere on the outskirts, it's a lot longer than 45 minutes from Bellingham to Vancouver. It's an hour and a half from the suburbs to downtown, minimum.

We don't, as far as I know, have problems with Mexican immigrants, but we've had a ton of gang violence recently (and many gang members are immigrants, asian or east indian). Just had 3 more incidents tonight, bringing the total to more than 20 shootings since late January.

Great to have you guys here. It was hard on the dog after you were gone ;)