"ART" Comes In Many Forms 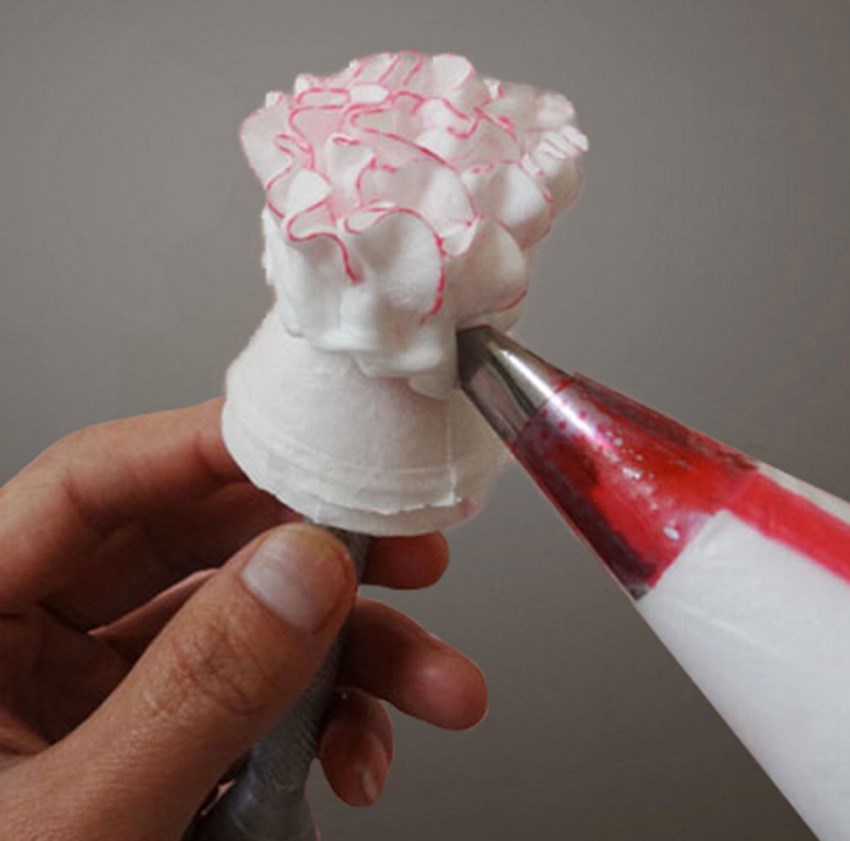 "C'mere... I wancha to try somethin'!"
My Mother was standing in her kitchen with her hands full of stuff that looked just like the photo above.
She was fashioning a rose out of cake icing.
It was absolutely beautiful.
"This is really easy for me to do and I want you to try it so I know if I just have a natural talent."
I took the tools in my hands and gave it a shot.
The result of my efforts looked like a hot cookie fresh out of the oven.

She was motivated to take a cake decorating class. Actually, the class didn't teach her much.
She baked a wedding cake for a member of our family.
It looked wonderful.
It tasted like a home-baked cake.
She left the reception with orders for three more cakes.
Word of mouth took off. She started baking a wedding cake and several cakes for parties and receptions each week.
Her "Hobby" was making pretty decent money.

My Dad was in charge of deliveries.
After a while the responsibility of producing and delivering something SO important to a once-in-a-lifetime event began to weigh on them both.
So they stopped taking orders, and disappointed LOTS of people.

And every time I go to a wedding and see a beautiful work of art I'm reminded of my Mom the decorator and my Dad the deliverer, and the fact that someone went through a lot of stress to get that cake delivered, intact, tasting like something others would want to put in their mouths.

It's a good memory.

Washington D.C. voters say they're being cheated-
They're citizens, but they have no real say in Congress.
They want to be our 51st State so they'll get two U.S. Senators and representation in the House.
I have a better idea.
Move the Nation's Capitol to Kansas City. Give the D.C. Real Estate back to Virginia and Maryland.

This solves at least two problems:
It makes our seat of government less susceptible to enemy attack, and,
It gives D.C. residents new representation in Congress via their new State residences.

And we don't have to worry about designing a new 51-State flag...
Yet.

Fifty-Nine minutes, 12 seconds.
That's how long I spent on the phone with my Internet Provider.
I woke yesterday and tried to watch some YouTube videos on our Roku System...
No workee.
We got a connection to our router, but no internet connection.
I reset everything that had a "reset" button.
I unplugged the router for 20 seconds, then plugged it back in.
Still no dice.
None of our neighbors have a connection.
Oh well... give 'em a little time to fix the problem.

So I called Frontier.com's service number and, as usual, got someone with an accent that made it difficult for me to understand.
"Go unplug your router."

I made three phone calls yesterday and spent maybe an hour on the telephone. I finally got the person on the other end to admit there was a technical problem at their end. She assured me they were working on it and the problem would be resolved soon.

I woke today with hopes she wasn't blowing smoke up my delicate tush.
I now understand why my tush was irritated.
We still have no internet connection.
I can complain if I just email them at "Frontier.com/service". I may do that just as soon as I have an internet connection.

I spent an hour this morning, mostly on hold, waiting on someone to tell me when I'll begin to get the service I am paying for.
Instead I'm informed a new router is being drop-shipped to my address because my router is more than a year old and MAY be my problem.
I'm now at the Public Library writing this.

So, you tell me...
What are the chances the new router will fix what ails us?

"Have you registered with the VA?" my friend asked.
"No. Why? Should I?"
"Well, we were exposed to Agent Orange and they're now finding LOTS of health difficulties associated with it popping up in our peers. You need to register with 'em just in case you have problems later."
And so I registered. And they've given me a pretty extensive semi-annual physical ever since.
My latest was yesterday.

My VA Doctor is a Pakistani female, complete with head scarf and now... wearing TWO face masks.
With her heavy accent and "muff murf stamig?" through the two masks, it's almost impossible for me to understand her questions.
But we muddle through.
She's VERY efficient.

My weight is down a little. My tinnitus is worse. PSA is okay. Cholesterol, Vitamin D, Sodium... all okay.
Neutrophils, auto... Neutrophils, absolute... Eosinophils and several other "Phils"?
Who is this "Phil" guy and why are they watching him so closely?
But apparently  all my "Phils" are fine.
The only Clinker in the closet?
My blood sugar. Thank you Mom. (Or maybe this is MY Agent Orange problem?)

My glucose level and A1C are both off the chart. I know why.
And we've all heard "Denial" is NOT a river in Egypt.
My glucose problem is caused by COUPONS.
Yeah, that's the ticket!

Burger King. Culver's. Little Caesars. McDonald's. Taco Bell. Wendy's. And tens of other fast food joints...
All send out coupons to tempt me.
And "Cheapo Me" takes complete advantage of 'em.
That's a LOT of carbs. And I think "Phil" is an expert at turning carbs into blood sugar.
I think Phil also loves the BIG nightly glass of Merlot.

But my relationship with Phil has to change.
My Pakistani overseer is now pointing a bony finger at me, promising me insulin shots if I don't get this glucose situation under control.
Her finger is a scary thing... reminds me of Halloween.

Retirement was supposed to be easy, relaxing, and enjoyable.
This is beginning to look a lot like WORK.
Where did I take that wrong turn?

Don't we already know the outcome of this trial?
If Chauvin is found guilty, many will be outraged. But the only bad thing that will happen will be he will go to prison.
If he's found not guilty, cities will burn, and people will die.
Black lives matter.

Yesterday I learned something I had not heard anywhere in the "News"...
Before he was even on the ground, Floyd said, "I can't breathe".
So he was an ill man, already suffering from respiratory trouble before Chauvin laid hands on him.
He also had a bad ticker, and was under the influence of several drugs.
None of that matters.
Black lives matter.

Do you see any way short of Civil War to get our country back to sanity?

Sara Jean says, "It's not fair. Women get old, wrinkly and ugly. Men get older, more rugged, and handsome."
But that's only true with some-
We watched "Executive Suite" with Barbara Stanwyck this morning.
A WONDERFUL, talented actress, she got prettier as she aged. In "The Big Valley" I thought she was beautiful.
And Errol Flynn certainly did not die a "rugged, handsome" man.

Genetics play a huge hand.
But environment and attitude also play a major role, don't they?

Covid vaccinations-
The rebel in me pretty much said "Let 'em shove it up their ass."
But my wife is a "Nervous Nellie" and worried about things like needing to get on an airliner if the vax is required.
So I acquiesced. We scheduled and got our shot yesterday. Part of the reason I agreed was because the vax was the Johnson and Johnson single-shot vaccination.
So... done.

And now it seems there are questions about the J&J vaccine that will impact some 15 million people.
Our "experts" have struck once again.

What a load of feces.

Six weeks in the Florida Panhandle... wonderful. But that part of Florida can be cold, windy, and wet simultaneously during Winter, so... BUG OUT TIME.
Fourteen weeks in Phoenix... great. If you spend time there you can easily understand why old farts like me spend Winters there. In the 3+ months we were there it rained three days. Temps this year never dropped below freezing. Normal days we experienced 65 degree highs; 45 degree lows, with humidity generally running 20% or so.
Nearly perfect weather, but we Midwesterners began to yearn for a raucous thunderstorm about the beginning of March!

We rented a Toyota Corolla for the trip home and decided to take an extra day in hopes we'd not be so exhausted when we reached our destination. I also decided to take different route home.
In the past we have driven South via Tucson/Deming, NM, El Paso/ Dallas-FTW/ Little Rock/and home.
We've also traveled via Holbrook, AZ/Albuquerque/Amarillo/Ok City/Tulsa/Springfield/and home.
Both those drives are long and, for the most part, boring. This time I decided we'd head North out of ALB and drive up the East face of the Rockies, hoping they'd be snow-capped and beautiful.
We were not disappointed.

The Corolla was comfortable. It drove nicely, got about 35mpg at 75mph, and had "smart" adaptive cruise control, (which henceforth will be a requirement for any future rental choice!)
We did NOT order a GPS option, and that turned out to be a mistake when I depended on memory as we headed North out of Colorado Springs...
Thank God I realized I was lost early on; stopped at a Fire Station, and a fellow Public Service worker got me back on the proper path home!

Motels we stayed in:
A "Comfort Inn", a "Super 8", and a "La Quinta". Since all we require in our temporary housing is a clean place to sleep and bathe, (and breakfast of some sort is also nice), we generally go the "budget" route for accommodations. All our stays were satisfactory, but I was surprised our normal choice, the La Quinta, had NO breakfast offerings at all.

The trip was uneventful. After gratefully spending the night in our own home and bed we returned the rental car and came home to resume our normal routine.
Scooter and truck started without fuss. But while I was sitting in my pickup allowing the battery to get it's first charge in months I caught a glimpse of movement to my right and saw either Mickey or Minnie sitting transfixed on the passenger seat. After a few seconds, MM decided to beat a hasty retreat into the bowels of my Ram/Cummins pickup somewhere. It was after a little searching that I noticed the roll of toilet paper we leave in the truck for emergencies had been well-used for nesting material.

Last night I set the trap... on the passenger-side floorboard, with peanut butter as bait. Investigation this morning found the trap gone!  I searched beneath the passenger seat... beneath the driver's seat...
Nuttin'. But further investigation beneath the extended-cab jump seat revealed the trap with a half-eaten mouse lodged against the rear bulkhead of the truck.

So the question now is-
Did Mickey get a bellyful of Minnie...
Or Vice-versa?