When I was VERY young, an older cousin had a serious argument with her husband and, wanting to get away from him as quickly as possible, ran to the rail yard to hop a freight out of town.
She had apparently been enjoying a few adult beverages and somehow lost her footing while trying to board the train, fell beneath the wheels, and was killed.
The story has always fascinated me, partly due to the grisliness of it, and partly due to the idea that she intended to escape an ugly situation by hopping the train. I wish I had gotten the chance to know her.
I imagine she'd have been "interesting" to know.

Trains and helicopters... Aren't they pretty much opposites as to what they do and how they do it?
"Simplify and add lightness" is the aeronautical engineer's credo. Make a part BARELY heavy and strong enough to do what it must do without failing and killing people.
With trains, seems to me, the opposite is true. The weight of the locomotive is absolutely critical to the machine's ability to do what it must do.
Weight? Schmate!

My fascination with trains has lead me to the guy in the video below... "Hobo Shoestring".
He looks like a bum. He's got a Southern twang to his speech that would make someone from one of the coasts dismiss him as a "rube".
He's neither. He owns an apartment in Johnson City, Tennessee, and refers to himself "houseless, NOT homeless". He has produced and published LOTS... maybe hundreds, of videos about how the rail system and components of trains work, and he ain't dumb... to me he's VERY interesting.

If you, like me, have an interest in how trains do what they do, I think you'll find taking the time to watch his stuff worthwhile.
Start with this one, and lemme know what you think:

"Lewy Body Dementia".
Ever hear of it?
We had not.

It's what drove Robin Williams to kill himself. He was initially misdiagnosed as having Parkinson's Disease, as some of the symptoms are similar.
L.B.D. is probably the second major form of Dementia, just after Alzheimer's.

There's a LOT of dementia happening in our world these days. Part of the reason for that is that we are living longer lives. Part of it is that we are exposed, more and more, to some pretty extraordinary chemical compounds in our lives.
Dementia runs in our family, so there is also a genetic factor. Whatever... when you notice you have "C.R.S. Disease", you begin to wonder if it is normal, or the beginning of a long, rough road ahead.

More on all this in the future.

Palestinians-
The would LOVE to wipe Israel off the map.They cannot do it because their most efficient weapon is a rocket they cannot guide to it's target. So they must launch them and hope they hit right in the middle of some elementary schoolyard.
Their next most potent weapon?
A sling and a rock.

The food there was uniformly "fair",  sold at a moderate price.
Breakfast was available anytime the restaurant was open.
The Country Store was an interesting place to peruse.
But for us, the thing that we valued most about Cracker Barrel was their "Books on CD" program.

We frequently take long trips in our car. We'd stop at Cracker Barrel and get a bite to eat, then find the Books on CD carousel, buy a book we found interesting, and listen to it during our drive. When we finished with it we could stop at the next Cracker Barrel we passed and return the book for a refund, minus a couple bucks for "handling". We used this service a LOT, and recommended it often to others.

On our drive home from Arizona this Spring we stopped and ate at Cracker Barrel. Finished with our meal we strolled around the store looking for the CD carousel and couldn't find it. When I inquired as to where it was I was told, "We discontinued doing that some time ago."
I'm heartbroken.

The TSA and Covid-19 restrictions have made flying a very unpleasant experience these days, so we'll be in our car for most future trips.
The Cracker Barrel Books on CD program could have been an important part of those trips.

But I won't miss the unexceptional food. 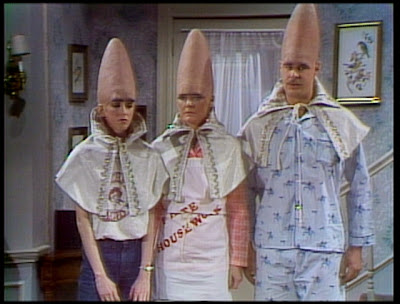 Coneheads.
Something about their appearance makes them pretty easy to identify.
I have to be careful about stereotyping individuals of their group, but DAMN it is hard sometimes!

1. We watched the cop-cam video of an incident in Minnesota. Five or six Coneheads were congregated around a car in a drive near the street. One of the Coneheads, a female, had a big knife. A policeman disembarked his car and his camera picked up the sight of a scuffle. The Conehead with the knife was trying to "cut" one of her fellow Coneheads. The Law Enforcement Officer shot and killed the knife-wielding Conehead, and the incident made National news.

2. My wife and I just returned from an excursion to Chicago via Amtrak. Shortly after we had settled in for our trip a group of recently released Conehead prisoners joined us in our car. Obviously elated about being set free, they were really feeling their oats and apparently they wanted to share their excitement with everyone else in our car. One of the Coneheads intermittently stood up and, addressing some of his fellows looked around to make sure everyone could hear his comments-
"F*** this."
"I F***ing told him..."
"That Motherf***** thought he was bad."

This public display continued for 20 minutes or so. I started to reach for the Conductor call button and Sara Jean said, "Please don't. It'll just cause trouble."
And then we sat through another five minutes or so of Conehead celebration and loud exposition. I once again started to reach for the call button, and SJ stopped me once again. "I'll take care of this" she said. She went to the cafe car and told the attendant there what was unfolding in our car.
"If you don't get this under control, my husband will try. I don't want him to get hurt."

Five minutes later the Conductor appeared.
"Sit down and be quiet or I will remove you from this train."
He came and told us IF he removes Conehead prisoners from the train... they go back to prison.
Our Conehead suddenly found a way to be a quiet Conehead.

3. We reserved a room for the weekend in a nice motel close to the Memorial Service we would attend. At 1900 hours or so we began to hear what sounded like children running and screaming up and down the hall. When I investigated the activity I found three Conehead children, without Covid-19 masks, using the hallway as a way to stretch their legs. Now and then their Mother would come out of her room and scream at her young offspring. They ignored her.
I made the decision to not call the front desk until 2200 hours, hoping by then the halls would be quiet. Kids are suffering mightily during this Covid-19 stupidity.
The kids settled down, thank Heaven.

But the next night at about 2000 hours we heard a female screaming that sounded something like "Get the mouse out of here!" We eventually figured out the dialect and realized the scream was saying, "Get HIM out of here!"
When I went into the hall to investigate I sighted a large female Conehead standing in the hallway pointing and looking at someone in her room.
She wanted to share her emotion with all 30 or so rooms that adjoined our hallway. Once again we retreated, hoping the dust would settle. Again, thank Heavens it did.

4. In Union Station waiting for our train we were in the Food Court eating at Chick-Fil-A. Sara Jean noticed a fellow passenger, a pretty Conehead, wearing a beautiful dress. As we departed to head for our train SJ walked near her, got her attention, and complimented her on what she was wearing.
Her eyes became daggers. No response.
I can only assume this Conehead truly WAS from France and didn't understand the compliment.

Some Coneheads claim their like are discriminated against when it comes to housing, job opportunites, and life in general.
I know there must be Coneheads amongst us who are embarrassed by the behavior displayed by their obnoxious brethren. Are those Coneheads actively trying to instigate change?
I hope so.

We are a divided Nation.
In some areas that division is palpable... uncomfortable.
And I am worried about where we, as a Nation, are headed.
I know this post might get me in trouble, but I love my country and hope we can once again be "E Pluribus Unum".
ALL LIVES MATTER.
Can we work toward making the world a better place for everyone?